My weekend, in pictures:

While walking to my hotel I encountered this wedding procession.

Poppy, Rachel, B.E. Earl and Robin at the Ginger Man

More BeerHer2010 pictures from The Ginger Man, as well as from ayza wine and chocolate bar, are available as a photo album.

Strolling through Central Park in a light rain

One of my favorite flower pics ever. Click through twice for full size.

One of many butterfly shots I took (see album for more)

Another notch in my Hard Rock belt

More ReNYC2010 pictures from Grand Central Station, Central Park, the American Museum of Natural History and the Hard Rock Cafe at Yankee Stadium are available as a photo album.

I had so much fun and can’t wait for my next trips — back to NYC as well as anywhere else!

In A New York Minute

The Lady and Her City

It was a whirlwind weekend. We picked up the girls right after school and headed to the airport for our flight to New York – La Guardia (via DFW). It was the first visit for my daughters and we had a lot planned. Not surprisingly, we didn’t manage to do everything. Despite this, we still had a great time.

Brittney & McKenzie Under the Statue of Liberty

First up for Saturday morning was a trip to The Statue of Liberty. Unfortunately, tickets for entering the statue herself had long since been sold out for this weekend, so we just toured the island. Marci and I had only viewed her via the Staten Island Ferry, so this was a new experience for us as well. As you can see, it was quite a cloudy day and, in fact, we got rained on while walking around Liberty Island.

Originally, we were going to meet up with some of Marci’s family at our hotel, but plans changed and we decided to meet them on Liberty Island. However, before they could arrive, it was time for me to head off on my own. My plans for the day were different from my families. While they toured Ground Zero, the Empire State Building, and went to a Broadway Show, I was having lunch with my second cousin, Dee, and then headed to the Houndstooth Pub for RenYC.

It was wonderful to catch up with Dee for a bit as we haven’t seen each other in a few years. At the same time, I follow her blog so I certainly didn’t feel out of touch. It’s funny, though not really surprising, that it took her moving from Kansas to New York for me to visit. After lunch, I had a few hours before the scheduled start of RenYC. I spent them walking around midtown for a while, headed back to the hotel. I took a short (though not as short as it was supposed to be) nap and then high-tailed it back to the Houndstooth Pub to join RenYC already in progress. 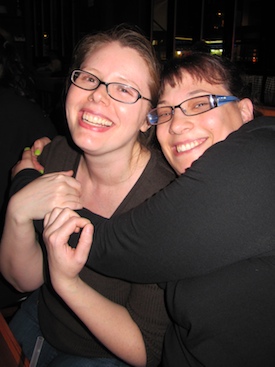 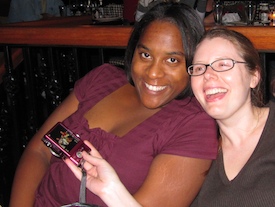 RenYC was a blast. In attendance were Poppy, Dawg, Robin, Rachel, B.E. Earl, Bill (aka YKnot), Bearette and her baby. We hung out eating and drinking for a number of hours. As always is the case at these types of events, time passed by much too quickly. For instance, I never managed to talk to Bearette before she had to leave.

From there, most of us (just barely — five of nine by my count) headed over to Serendipity 3 for dessert (or, in Poppy’s case, breakfast — which I think had something to do with her level of intoxication). I knew this place was semi-famous (or perhaps full-on famous, I’m not sure), but I hadn’t expected the hour-long wait that we encountered. No matter, the weather was reasonably nice and we were still able to socialize while we waited outside.

I had hoped that Marci and the girls would be able to meet us for dessert, but their show (Mary Poppins) ran longer than I expected and then they went back to the hotel before deciding to come get dessert after all. The result of this delay was that RenYC officially ended about fifteen minutes before my family arrived. No collision of worlds on this trip! 🙂

For other RenYC summaries, see Poppy’s and Rachel’s. And their Flickr streams.

Sunday was supposed to start fairly early with an NBC studio tour. Instead, we slept through most of Sunday morning. We did eventually head over to Rockefeller Center, but the tickets for the tour were sold out. Oops, we meant to get those on Saturday, but obviously didn’t. We went to the American Girl store, but I think my daughters are just a bit too old for that store, though they did buy a number of books. 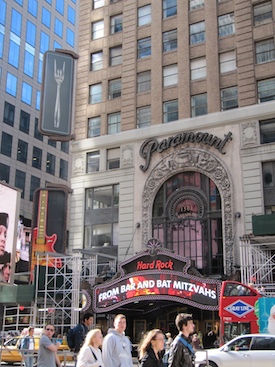 We had lunch at the Hard Rock Cafe in Times Square. What can I say, Dave2 has inspired me. Only belatedly did I realize that I need to do a much better job of exploring the place while I’m there. I suppose I shouldn’t have been surprised at how much more impressive this location was than the Toronto location we visited last month.

Our final plans before our flight home included visits to the Metropolitan Museum of Art and FAO Schwartz, but there simply wan’t time for both. In truth, there wasn’t really enough time for the Met at all, but Brittney said that she just wanted a quick visit through the Egyptian exhibit for some pictures for school. Also, she wasn’t interested in FAO Schwartz. Naturally, we split up. While Marci and McKenzie played on the piano mat at FAO Schwartz, Brittney and I went to the Met. After a longer than expected subway ride and walk across Central Park, we were left with only fifteen minutes at the museum. Luckily, it was enough. We got the pictures she wanted. Plus, the walk through the park was a pleasure in and of itself.

Our final adventure, excluding the plane trip home, was the bike taxi that Brittney and I decided to take to get back to the hotel. As you can see in the picture, Sunday turned out to be a very nice day and the ride was quite enjoyable. I think it was Brittney’s favorite part of the entire trip — or, at least it was while it was happening.

It’s normal to feel like a leisure trip has ended too soon, but trying to squeeze a New York City trip into 43 hours is just crazy.